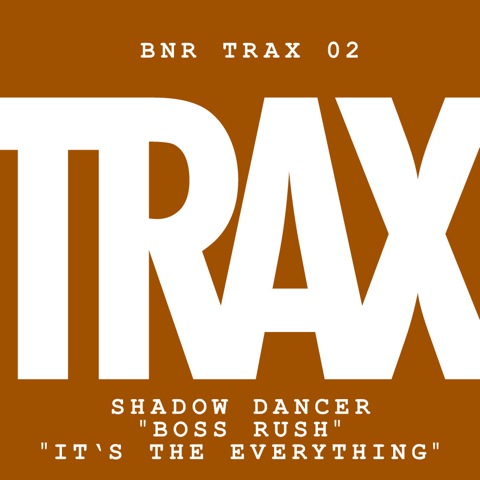 those ruddy shadow dancing bastids have done it again. not content with making one of my favourite recent releases in the shape of double a-side (or should that read two-track download release) boss rush/it’s the everything, now they’ve made a top mix to accompany the release. i suppose i could always jibe them for being, like, so last month or whatever (it’s totally movember now lads), but that’s moot. jackin’ acid-infused techno is the order of the day, it seems… in case you haven’t noticed, there are 79 tracks on shadow dancer’s soundcloud, most of them mixes. days worth of tunes. get familiar. 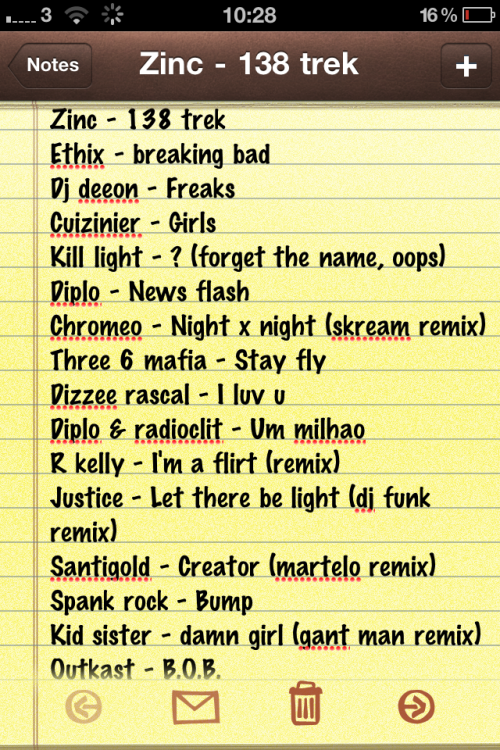 can i have a rest already?! the above is basically what i played last night. i tend to write down what i’m playing in my phone as i play it, as much for myself so i know what i play for future reference, and not to be too repetitive, and sometimes post it online. i’ve never really played a dubstep set before, and i’m not exactly deep in the genre, so a lot of the tracks and transitions were inspired by a mix i did two years ago mixing dubstep and ghettotech. or skirting the edges of each. there were two new(ish) tracks, that ethix track and the kill light track which is called animate, for the record.

tonight i’m going to see trentemøller and then play at transmission, where i’ll hopefully play some stuff from the likes of…. shadow dancer, screendeath, savage skulls, renaissance man, club cheval, carte blanche…. or maybe none of them at all. we’ll see.

but we still have time for some more july mixes. those ruddy shadow dancer folks have been pretty mix happy lately, and the latest one looks, well, i don’t know, i am alarmingly unfamiliar with most of the tunes thereon. but these lads have taste, so you can trust it’ll be a bit good.

stuff what is out

it’s great when artists you like give away stuff for free. one such artist is a-trak. a few years ago he impressed us all with dirty south dance, that peculiar combination of electro and rap, and now he’s done it again with dirty south dance 2. i’m not quite sure how impressed i am second time round, but it’s definitely worth a listen, and will most likely bring a smile to your face at least once. hearing diddy rapping again is also a trip! just bear one thing in mind: “if you choose to download the audio in Ogg Vorbis format you’re a weirdo”.

another great act, haido/transmission favourite shadow dancer, has put together a couple of exclusive mixes of late. one was for the aforementioned transmission blog, and the latest is to herald the southwest four weekend in this coming august. you have to register to the sw4 site to get the mix, but that’s certainly a trial worth enduring. i mean, check out this tracklist! oh and if you haven’t already, check out the lads’ sound and mixclouds, one full of demos and the other full of mixes new and old. a veritable treasure trove.

dancing in the dark

shadow dancer made their return to dublin last night and absolutely smashed the place. a few sound card-related issues aside, they rocked things pretty hard but alas forgot to record their set. d’oh. warmup slot was pretty fun, few transmission favourites, a few new tunes, and a couple of classics i’ve never had the chance to play before. next on the list is sidetracked this friday, for more low-slung disco grooves. yup, just puked a bit in my mouth…

So last night either my blog or WordPress itself crashed, and I was unable to post the second half of this interview. I’m guessing it was the blog – the first part resulted in an unprecedented wave of interest here, which shows just how much interest there is in the Farriers. I’m hoping that all you Dubs out there reading these pieces will show up at Transmission next week! Anyway, read on. 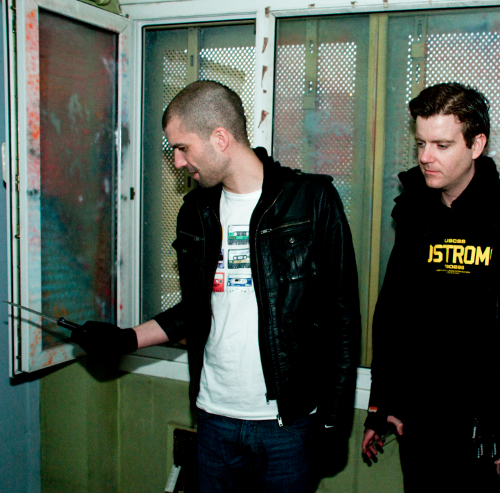 You’ve been making music on and off for the last X number of years. What has it taken to finally arrive at the sound you’re making now?

Paul: A combination of boredom with the direction of lot of dance music was going in and whatever technology we use. The one factor that has remained the same over the years is that we create music that we’d like to hear but never do… if that makes sense. Back in the 90s, we wrote a lot simply because we couldn’t afford to buy records and we wanted something to listen to. Come 2003, we stopped producing as music had become much more accessible and life in general got in the way. Plus, we were using a studio set-up that consisted of ancient, unstable hardware (Amiga A500, Akai S900, knackered old FX unit, mixing desk with faulty connections, etc) so producing had become virtually impossible. It was quite a miserable time, looking back, as I still had a compulsion to write but just couldn’t.

Three years later, out of boredom, I tried a demo of FL Studio and discovered that not only could I write using only a computer, but that I still loved doing it. Of course, having avoided clubs for a few years, the early Shadow Dancer material (and a lot of Golden Traxe) doesn’t follow some of the conventions of dance music like 16-bar run-ins and outs, for which we’ve had plenty of criticism. The more recent stuff is more club-friendly as a result of the last three years of gigging and absorbing what we’ve seen and heard.

Al: I think in the early days we would try our hand at everything – there is hardly a genre we haven’t had a go at, including ambient, drum’n’bass and pop. I think what happens over the years is that you realise what is really part of your idiom and what is contrived. I don’t think that the Shadow Dancer sound is contrived.

END_OF_DOCUMENT_TOKEN_TO_BE_REPLACED

Well this is something special. Normally when you do an email interview, the questions are adequate enough. Sometimes they take things up the wrong way and you’ve no way of qualifying your question. Sometimes they just respond with the bare minimum. In this case, I’ve got so much material that I’m actually going to split it in two rather than cut anything.

So, here you go. Two brothers, Paul and Al Farrier, better known to the world as Shadow Dancer, the formidable duo on Boysnoize Records. They’re not touring right now, but they’re making a special appearance at Transmission next week, and in advance of that gig, they were kind of to answer a series of ridiculous questions from yours truly. Enjoy.

You were born in Liverpool. You’re now based in Manchester. Fill in the gaps?

Paul: We went from Liverpool to Saudi Arabia to Liverpool to North Wales to Manchester (and then I ended back up in Wales, where I currently live, although a move back to Manchester is on the cards as there’s not much in the way of a music scene around here… the K-Klass days are over).

Al: We grew up in Wales, but I was really attracted to Manchester because I was obsessed with Manchester music – New Order. I always wanted to live in a big city, but London didn’t really occur to me. I wasn’t even particularly aware of London, but went to the Haçienda when I was 17 and I was hooked.

Is the sibling dynamic a hindrance or a help? Apart from touring/performing, how much time does the project mean you need to spend together?

Paul: It’s a definite help when touring and performing as Al provides extra hands and options for the live set, and he’s more outgoing than me… I can come across as the “moody DJ” sometimes, but it’s really down to my being shy and occasionally uncomfortable around large groups of people having far too much fun. We haven’t produced together for a long time now, so I don’t know how that would work now. There’d probably still be a lot of arguing.

Al: It’s never been much of an issue really, because we’ve also been best friends since we were kids and we grew up discovering and learning about making music. We spend a bit of time together when we’re not performing. I take a back seat these days in terms of writing and production. Paul’s always buying new bits of kit, and he generally shows me the ropes.
END_OF_DOCUMENT_TOKEN_TO_BE_REPLACED

watch out for lesser-spotted djs bok bok, haido and parle

well transmission on saturday was nuts. even though it was just us residents, the place was packed. like at krash, i tried to play as many tracks as possible that i hadn’t played before – though mr blood made an appearance yet again – it’s just too good of a tune to let go! seriously though, as a clubber i know i get bored hearing more than a few tracks over and over, so i guess as a dj it’s my job to keep it interesting…

unfortunately we had to cut the last track short. think we even finished before the lights went on! crazy times. definitely want to do more back to back sets – really poses a challenge i think, and gives you a chance to have fun trying to get inside someone’s head.

what i’m really excited about is this: interview coming soon!

it’s 2010 yeah? so i should really start talking about new music. i was thinking about a top 5 yesterday and was pretty stumped… so that’s a big sign telling me i need to get on top of things!

sounds pretty familiar right? that’s funny, these are the lyrics put together by belgian wunderkid paco de moor. apparently born in the early 90s, he probably shouldn’t be that familiar with the perils of alcohol… yeah yeah. anyway his track the morning after is pretty impressive. to me it sounds like a harder version of hugg & pepp‘s sweet rosie. the plodding bass and synths, the distorted vocals, the relentless groove – while both tracks are pretty much defined by their electronic qualities, neither ever sacrifices any funk. he’s also just put out an insane mixtape to go with his single release (on juno and itunes) – it’s called the morning after mixtape but i think i would actually die if i heard this too early. he’s got some of my favourite people on there – tiga, shadow dancer – as well as some of his own tracks, and even some re-edits from his modyworks label mates. just be careful if you’re walking on that treacherous ice and listening to this – it might lead to an increase of pace and thus a subsequent battle with gravity…